The objective of this work is to perform the aero-structural design optimization of a transonic business-jet wing. For this purpose, Euler 3D CFD with refined mesh and a beam-based finite element model for the wing structure have been used: the first to predict aerodynamic performance of the wing, the latter to predict overall wing stiffness (bending and torsional).

The available literature about MDO applied to aircraft design uses the Breguet range equation as objective function. This means that the variation of attitude during cruise, which is related to the loss of weight caused by fuel consumption, is not taken into account.

The innovative approach presented in this work consists in dividing the cruise into a certain number of steps; over each step the attitude is considered to be constant, so that the Breguet range formula can be applied.
The total range is then evaluated as the sum of the ranges of each step, leading to a sort of multi-objective optimization. The bigger is the number of step considered, the more accurate is the solution obtained. This approach is called “step-range” and its results are compared with those obtained through sequential discipline optimization and single objective optimization. 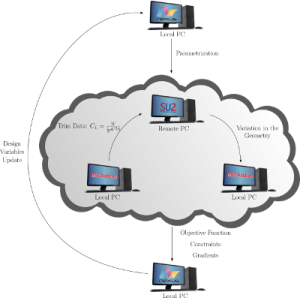 Nexus has been used to guide the aerodynamic solver (SU2) and the structural one (Nastran) in the search for the optimal solution.

Main advantages of using Nexus for this application:

Once the design process was integrated within Nexus, four different optimization tasks have been performed (single-objective uncoupled, single-objective coupled, multi-objective with 3 steps, multi-objective with 9 steps and interpolation) and the results demonstrate that the developed method is successful when applied to this specific case. In particular, comparing the results obtained from the single-objective optimizations, the coupled technique leads to a larger improvement than the uncoupled one. Both the three and the nine-point optimizations lead to better results than the single-objective one. The nine-point optimization turns out to be the most promising approach, highlighting the effectiveness of the subdivision in different steps of the cruise. Actually, this allows to consider the variation of the aircraft attitude during the cruise.
Results are reported below as Mach number on the upper and lower wing covers for the initial and final (optimized) configurations

The work has been performed at the Politecnico di Milano as final year MS.C Thesis. iChrome wishes to express its gratitude to Andrea Siciliani and Paolo Scaramuzzino for this very interesting application of Nexus and for letting us disclose their findings. Additional queries on iChrome’s Academic Program can be found HERE).