iChrome’s software solution Nexus has been instrumental to Ferretto Group ®(1), a leading brand in the design and production of high-technology storage systems, to optimize the performances of their Vertimag range of products.

The work is part of a larger Research and Development activities, carried out by Ferretto SPA in collaboration with iChrome, in order to optimize the full range of vertical warehouses using numerical optimization methodologies and non-linear finite element simulations. The objective is to maximize the capability of the system to carry loads while minimizing its weight, manufacturing costs and production time.

The basic idea is to use a Nexus to drive a parametric CAD model so for to automatically regenerate the geometry of the parts. The new geometries are thus cascaded to a FEM software to estimate the structural performances of the components. Additional semi-analytical methods have been added to the workflow to account for manufacturability constraints as well as cost feasibility. Nexus closes the loop so that CAD parameters are changed in order to maximize structural performances, whilst satisfying additional manufacturing constraints. 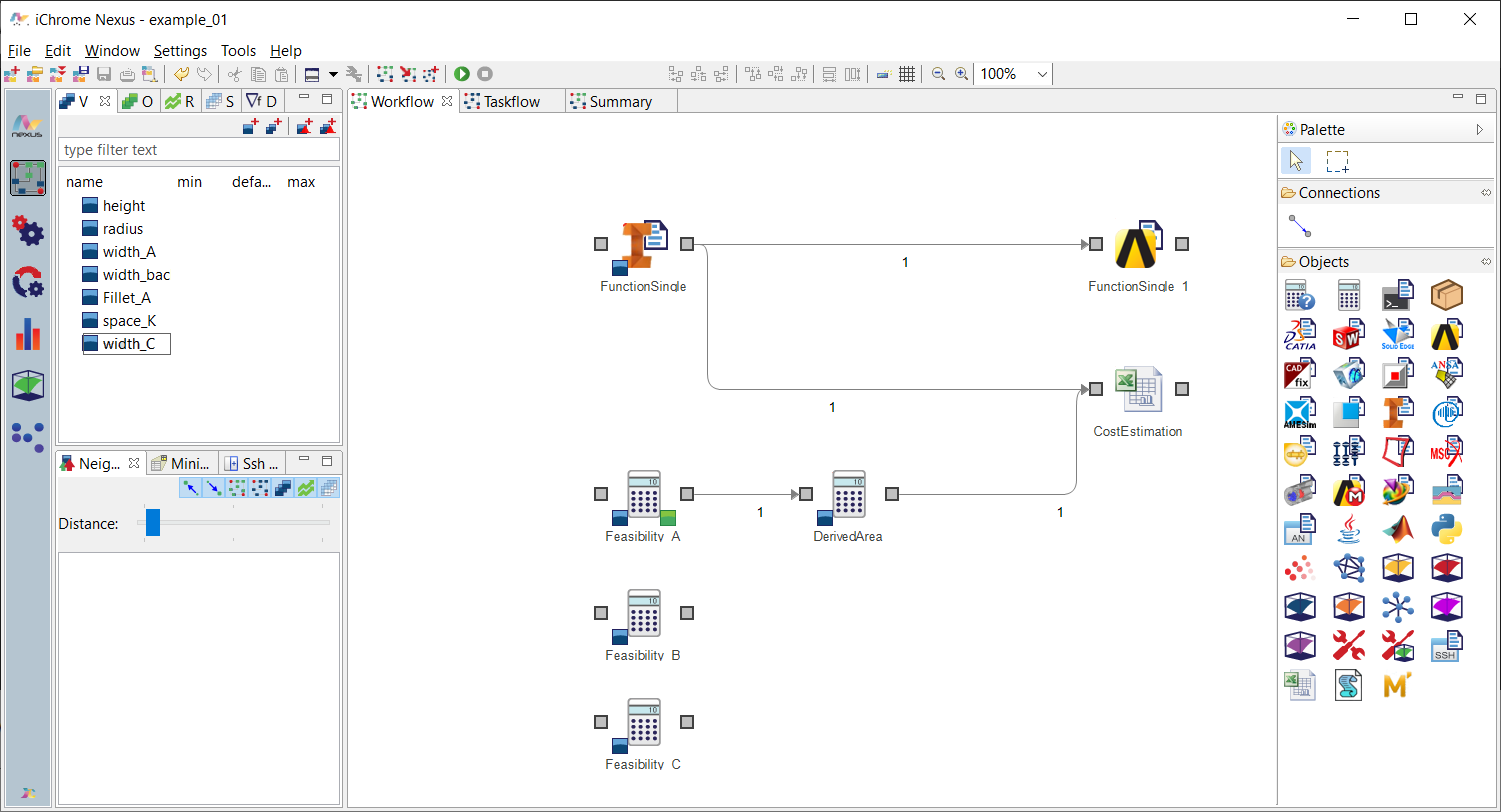 The structural collapse was analyzed by nonlinear FEM simulations performed with Ansys Mechanical. The typical dimensions of the vertical jambs are such that it is not possible to fully distinguish between a pure geometric instability (typical of slender profiles and thin walls) and collapse due to the onset of local plasticity phenomena.

For this reason it was preferred to use non-linear static analyses. These latter allowing to account for both geometric non-linearity (via large displacement model formulation) and the effect of the plasticity of the material. However, such accurate estimation of the state of stress of the vertical profiles and the identification of the most critical areas come to an higher computational cost compared to the one required by eigenvalue-based buckling analyses.

A typical FEM collapse analysis has been reported below. The deformation and stress field well highlight he onset of collapse due to the combined effect of increasing deformations and the localized plastic strains, which lead to the sudden collapse of the structure.

Trade-off studies have been formulated as multi-objective optimization problems, where collapse load, weight and costs contribute to the definition of three distinct objective functions. We want to maximize the collapse load while reducing costs and weight (i.e. used material).
Additional constraints are applied on the geometry, by constraining the range of variation of the CAD parameters so to reduce as much as possible invalid/broken CAD geometries and to reduce as mush as possible unfeasible analysis loops.
Nexus turned out to be particular effective in doing that thanks thanks to the adoption of so-called restriction constraints, which enabled to discard geometrically unfeasible solutions before these are propagated to the full evaluation chain. Restriction constraints, unlike traditional ones, allow you to discard the configurations that do not meet the requirements up-front, without performing any CAE analysis. In this specific application, we estimated an overall saving of 40% of the overall computational time. 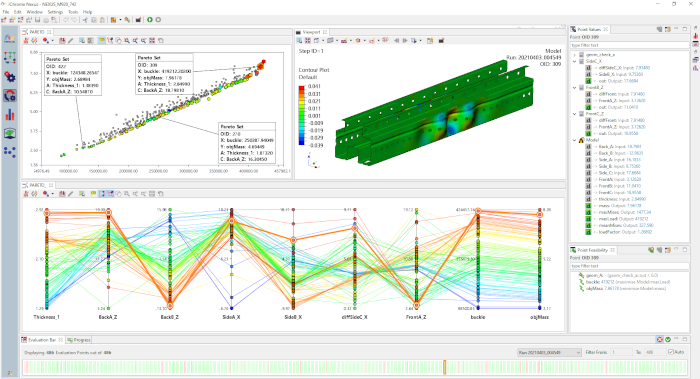 The optimization problem was tackled using the Multi Objective Genetic Algorithm (MOGA) of Nexus, the implementation of which is derived from well-known NSGA-II. The optimization process has been monitored in real time thanks to the Nexus Design Explorer module, which enables real-time monitoring of analysis, control and display of results.
Convergence was reached with about 400 FEM evaluations. Given the demand for hardware and software resources needed to obtain the solution, the scheduling features offered by Nexus were used. These made possible to schedule and change in real time the number of CFD simulation running in parallel – using full resources over-night and freeing up resources for the day-to-day task during the day time.

The work focused on the use of CAD/CAE integration methodologies and multi-objective optimization with Nexus in order to identify the best trade-offs between weight, structural performance and manufacturing constraints.Compared to more traditional design techniques, the procedure herein adopted was instrumental to rigorously perform analyze multiple configurations. In this way it is possible to perform large-scale tradeoff studies and to obtain reliable design curves for the definition of new product ranges and variants.

(1) Ferretto Group® Founded in Vicenza in 1956, Ferretto Group SpA is one of the leading Italian manufacturers of solutions for the storage and handling of materials. Thanks to its over sixty-five years of experience and a continuous investment in research and innovation, the company designs and manufactures a complete range of cutting-edge solutions for all the needs of any sector and application.